After completing a few naps Saturday, necessary to recover from a very busy two weeks, I gathered myself and my kit and headed out the door to be outside and maybe create a photograph or two.

My initial intention was to explore a beach near the Ventura river but the clouds from the storm that had rolled through the area were rapidly disappating and I love clouds so I made a u-turn and headed down the coast following the storm clouds to try and beat the clearing storm. As I neared Malibu, I started encountering a bit of rain and the sky was darkening. My hopes for some drama in the sky rose and I was close enough to El Matador Beach that I figured to give it a go. I was happy to see that the parking lot was only half full thanks to the storm and coolish temperature. On the weekends, El Matador is usually crawling with people, and being with hoards of people was not something that I was in the mood for. Even during the week, I have had to compromise with setting up compositions to avoid having other photographers in my field of view.

It was still raining as I climbed down to the beach. The sky was dramatic! I had arrived early thinking to be there in time to set up for what I hoped would be some fireworks at sunset, so the sun was still pretty high in the sky at a little over an hour before sunset, creating very high contrast lighting. As I walked down the beach looking for a composition, I came across some beautiful veining and rivulets in the sand with black in the bottom and fortunately no foot prints! I saw a composition where I felt I could use these rivulets as diagonal leading lines to a large anchoring rock that was the first and largest of several rocks to lead my eye towards the horizon and the brightening sky. The light though was not soft enough to allow much color, so I set up to create a black and white image. I set the tripod up about 12" off the beach and dialed the exposure in to capture the drama of the clearing storm.

I have posted four images with this post, the second I have added since the original post was published. The light did indeed come in with an incredible show of red. The second image was of the bluff behind reflecting the pre-sunset color and looked amazing set off from the color of the sky. The sunset was special and quite gorgeous. I was pinned in by other photographers from getting the best composition but overall I was happy with what I was able to do and the photograph captures the incredible beauty that was unfolding.

As beautiful as those scenes were, I must say that my favorite is 'Clearing Storm'. I had to work a little harder for it and I love that it captured the drama of the scene as the sky moved from dark to light with the light reflecting off the rivulets, the rocks and the water. I have just printed it on Cason Baryta Photographique which is perfect for this image. 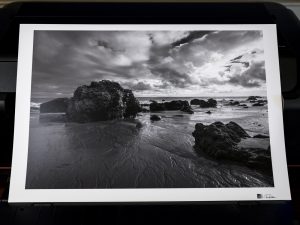 The second image, I have yet to name this one, I really like too. A little shift in my position and the sun entering into the golden hour gave some wonderful color and movement with a 60 second exposure. I have made a 17 x 22 print on Cason Rag Photographique which is a smooth matte paper perfect to communicate the mood.

As always, I hope you have enjoyed this post and the scenes captured in the photographs and I welcome your comments, likes and shares. It is my hope and intention to bring you with me through the images. 'Clearing Storm' will be available as a print soon.