Window into the Blue

The Grand Staircase Monument was established in 1996 by the Clinton administration and originally encompassed more than 1.8 million acres. Unfortunately the greed and shortsightedness of the current administration has reduced the monument by 47%.

I wanted to visit the area for my spring trip to Utah so did some general research into possible explorations. It is sooo vast, similar to the Death Valley area in that excursions mean getting into the jeep and driving to get to trailheads and points of interest. While highway 12 and 89 dissect the area east to west and north to south, much of the access requires driving on unimproved roads for miles. In dry conditions these roads are typically washboarded which was no problem for our jeep but would jar the mirrors off a street car if driven more than 15 - 20 mph. As the time for the trip drew close it became clear that there would be some weather accompanied by uncertainty, drama saturated skies and impassible roads. The fore mentioned roads consist mostly of clay which when wet will coat the most aggressively treaded tire with a thick layer of slick mud that essentially removes any traction whether from fours wheels or two. It was with this backdrop that we happily embarked.

The 'we' for this trip was myself and my son James. I was very happy for the nature of the trip to become less a photography outing and more time with adventures shared and memories created though there were were many photographs taken.

Our first evening was spent exploring the hoodoos down the road from our campsite on BLM land. I found the composition for Garden View after we had hiked around a bit and settled in with my GFX 50s setting up for last light to bring some warm glow to the hoodoos and terrain behind. The skies were beautiful but were muting the light until it reached just above the horizon and broke through doing its magic on the scene. I captured this with the 23mm at iso 100 1/4 sec at f14.

James was off getting images with a wide angle lens so I packed up after the sun had set and walked around the hoodoos with my iPhone xs getting ideas for future visits. The first image, Munchins and second Window into the Blue were taken in the beautiful afterglow and then blue hour light. After getting these uploaded into my computer I was surprised at the quality of these images. I shot them through the Lightroom app so was able to get raw files instead of jpegs giving me the maximum amount of data so I could bring out all the detail in post. Amazing quality for a tiny lens and sensor.

I awoke early and took a solo visit to a water fall that was about a 30 minute drive away to the trail head for a 3 mile hike in to the falls. My research for the light conditions was faulty in that I read that the direct light didn't arrive at the falls until mid-morning. I was disappointed to arrive to see the harsh light of the direct morning sun blasting the scene. Oh well...I set about to make the most of my being there and found a corner that offered a nice composition and just sat for a while to enjoy being there. After a little while I decided to set up the 4 x 5 and see what I could do with Ektar 100 despite harsh light. I set up with the 125mm to eliminate the sky from the scene that began just past where the falls started. I was able to accurately capture the beautiful colors with a nice composition all while being soothed by the sound of the falls. I will need to return to be in some soft light though which is really the only way to shoot a waterfall. After packing up the 4 x 5 I put the 23mm on the GFX which equates to 17mm giving a much wider angle of view and played around with a fun black and white composition that included the storm clouds that were starting to form. I like this one and it gives me ideas about first or last light with the same composition.

After hiking back out and getting back to the RV for some lunch James and I went for a drive to explore some more of the area along highway 12. There are some great viewpoints with turnouts to appreciate the expansive views. There were some storms roving around the area so the sky offered a pleasing backdrop to the views. I stopped a couple of times and took a few hand held shots, Along 12 and Overlook.

The next morning we headed west on 12 and turned off at the road to Kodachrome to drive further west on a dirt track called Skutumpah road. We stopped at the top of a climb that offered a beautiful view of the basin back to the east. I set up and captured a pano of the basin with fresh snow covering the mesa beyond. After enjoying this view we continued west to visit the narrows at Willis creek. On the way I was appreciating the ability of the jeep to cruise through the still mucked up road from the overnight storms. The hike from the trailhead to the narrows was pretty short and reminded me of the excursions we had in the higher elevations of Zion. Taking advantage of overcast skies I set up the 4 x 5 on a composition and enjoyed some reflected light in this little slot. The narrows only stretched for maybe 75 yards so after we hiked through and played around with some viewpoints looking back towards where we had come, we headed back to the jeep. We had intended to visit Kodachrome Basin later in the afternoon and since that was still some hours away we decided to visit Bryce even though it was not a good time of day for photography. Neither of us had seen it before so we took the chance and drove the hour or so to get there. It was a contrast to the quiet and relative solitude we had experienced to this point of our trip as the tour bus multitudes had descended upon the park. It truly is an extraordinary place and worth a visit. 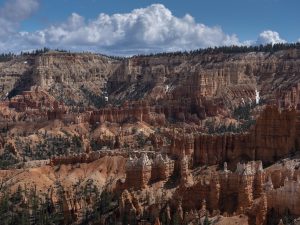 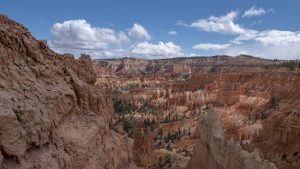 If you want to shoot compositions that have been taken thousands of times before, there are opportunities at first light and sunset with viewpoints with those names to guide you to the best vantage points to take advantage of the light. The vastness of the multitudes of spires and hoodoos saturated in such rich color is a wondrous sight to behold gazing down and across the expanse of the amphitheater.                                              We happily left the hordes and headed back east to Kodachrome. Kodachrome is a state park so we paid our fee and set about to explore the roads. The first we took headed east. After negotiating a small herd of cows with their calves that had strayed onto the park land we stopped and I put the 100- 200 zoom on the Fuji and took a hand held shot of a scene looking south with wonderful late afternoon sunlight breaking through storm clouds to shine on a lone hoodoo in the mid-ground. Stormlight

We then headed further into the park up towards the campground and stopped to hike a trail that led through a garden of chimneys and hoodoos. I left my pack and just grabbed the Fuji that still had the zoom on it and enjoyed capturing some nice light as it highlighted some of the cool formations that are the highlight of this great state park.

After a nice drive back to where the RV was parked, the sky was going off as the sun set so as I was getting my gear out of the jeep I stopped in front of the RV to shoot the view from the front porch of our campsite. It was a long but wonderful day exploring some really beautiful country.

To view high res fullscreen images click here. For some reason this carousel will skip some of the images when you press the arrow buttons so best when the page opens to click on the first image and then proceed.